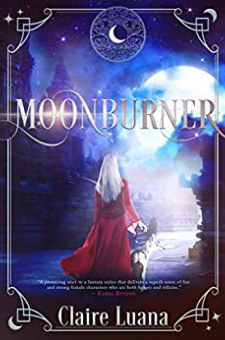 Mulan meets Sarah J Maas in this thrilling tale filled with celestial magic, death-defying adventure, and enduring friendships. Kai is a Moonburner—a female sorceress reviled by her people and normally killed at birth. Except Kai's parents saved her by disguising her as a boy—a ruse they've kept up for almost seventeen years. But when her village is attacked, Kai’s secret is revealed and she’s sentenced to death.Thankfully, the gods aren’t done with Kai. Despite the odds stacked against her, she escapes her fate, undertaking a harrowing journey to a land where Moonburners are revered and trained as warriors.But her new home has dangers of its own—the ancient war against the male Sunburners has led the Moonburners down a dark path that could destroy all magic. And Kai, armed only with a secret from her past and a handsome but dangerous ally, may be the only one who can prevent the destruction of her people...Moonburner is Book One in the completed Moonburner Cycle, a sweeping coming-of-age fantasy series perfect for fans of Sabaa Tahir, Alison Goodman, J.C. Kang, and Elise Kova. Scroll up and one-click to read today!