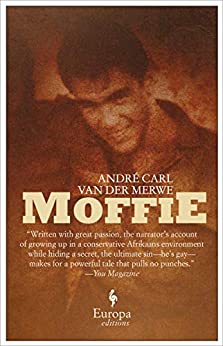 A gay South African endures military conscription during the Angola Bush War in this autobiographical novel of persecution and hope— An “electrifying debut” (Shelf Awareness).

Nicholas van der Swart always knew he was different, but to avoid the violent punishments that come with being gay in Apartheid South Africa, he has carefully kept his true self a secret. By the standards of his brutal father and the machismo culture of Afrikaners, “moffies” like him deserve nothing but scorn.

Then, at nineteen years old, Nicholas is drafted into the South African army. He soon finds himself caught in a world entirely at odds with his identity, forced to fight for a cause he doesn’t believe in. Here, he will face the hatred and violence of his tormenters, but will also experience his first glimmers of love, and finally find the strength to survive.