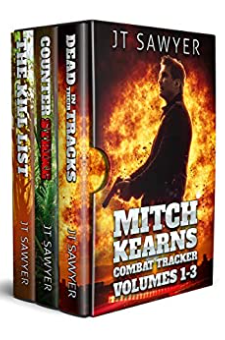 If mantracker Mitch Kearns is on your trail then there's no place you can hide. ** From Bestselling Author JT Sawyer**With over 400 pages of action adventure, these books have 200+ five star reviews on Amazon.3 fast-paced thrillers jammed with survival, adventure, and international intrigue. Meet Mitch Kearns, a former Special Forces Combat Tracker who works for the FBI hunting down notorious criminals. Crossing paths with Israeli agent Dev Leitner, the two seasoned operators join forces to bring down terrorist cells, rogue assassins, and black-ops mercenaries in these adrenaline-soaked novels now available in one boxed set.>>> Volume One, Dead in Their Tracks: FBI Agent Mitch Kearns had just finished teaching a mantracking course and was looking forward to time off when the daughter of a former black-ops mentor shows up on his doorstep in desperate need of help. The Aeneid Corporation, a military contractor that provides mercenaries to third-world governments, wants Devorah Leitner dead and the secrets she carries buried. With his life taking a drastic turn as the two are pursued by trained killers through the desert, Mitch has to use every trick in his arsenal as a former combat tracker to elude their pursuers until they can thwart the sinister plot to launch a terrorist attack on U.S. soil.>>> Volume Two, Counter-Strike: Join Mitch and Dev as they head across the globe in pursuit of a deadly pathogen that has fallen into the wrong hands. From the boreal forest of Sweden to the jungles of Indonesia, the two warriors must pool all of their skills to overcome an adversary bent on releasing a virus that can level humanity.>>> Volume Three, The Kill List: Former combat tracker Mitch Kearns is back in this explosive new thriller from JT Sawyer. This time Mitch is back in the U.S. visiting a friend at a secluded home in Colorado. Little do they know that there is a killer in their midst who is plotting against them for actions connected with a mantracking case Mitch was involved with a year earlier. With a storm moving in and one of their group dead before nightfall, they must work together to figure out who the traitor is and escape the perilous canyon where they are trapped.About the Author: JT Sawyer is the pen name for Tony Nester who makes his living teaching survival courses for the military special operations community, Department of Homeland Security, US Marshals, FAA, and other federal agencies throughout the US. He has over 25 years of experience testing long-term survival skills in the desert, mountains, and forest. JT also served as a consultant for the film Into the Wild. For more information, visit jtsawyer.com.