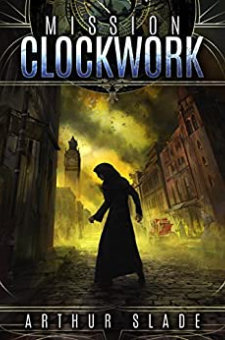 He's the greatest spy of the Victorian era, but he's met his match... Almost since birth, Modo has been rigorously schooled as a secret agent. His master, a British Lord, took advantage of Modo’s unique shape-shifting talents, training him to morph from his unsightly, hunchbacked-self into anyone he liked. When Modo is teamed up with the beautiful Octavia, his reasons for wanting to shape-shift become, well, more complicated. He never wants her to see his true appearance.Then urchins start disappearing from London streets, a high-ranking British Lord gets assassinated, and Modo comes face to face with a ruthless woman with a metal hand. It's clear that a deadly, secret organization has the British Empire in its sights. It will take every ounce of skill, guts, and luck for the pair to survive.Mission Clockwork is a steampunk-powered, action-packed adventure featuring brilliant heroes and bloody brilliant villains. It's the first novel in the award-winning series from bestselling author Arthur Slade.Start the adventure! Buy Mission Clockwork today!This novel was previously published as The Hunchback Assignments."A brilliant sci-fi mystery set in old-world London." - The Calgary Herald"An excellent start to a promising new series." - Kirkus