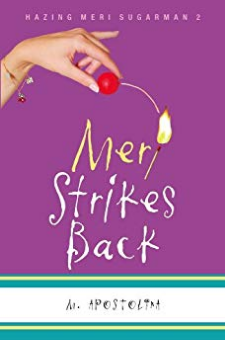 Meri is back with a vengeance!When we last left our tale of deceit, blackmail, and really great shoes, our heroine Cindy Bixby had gotten rid of Meri Sugarman, the diabolical sorority president of Alpha Beta Delta.Now Cindy, along with her sorority sisters and friends at Rumson U., including her über-hottie boyfriend, Keith (yum!), is working hard to rebuild the sorority . . . but then along comes Meri.She's back. Sure, she's not allowed anywhere near Rumson U., but do you really think that will stop her? (Get real!) Meri's still got a few tricks up those Dolce & Gabbana sleeves, and she's determined to destroy Alpha Beta Delta once and for all -- and exact her cruelest revenge on Cindy!But Cindy is nobody's fool anymore. She's ready to do whatever it takes to beat Meri!Publishers WeeklyReaders who enjoyed gaining access to Cindy Bixby's diary entries in Hazing Meri Sugarman will want to read more in Meri Strikes Back by M. Apostolina. Cindy, who kissed Meri's boyfriend and pushed Meri out of the picture in book one, attempts to put her Rumson U. sorority back together again. But banished Meri has a plan to bring down Alpha Beta Kappa. Copyright 2006 Reed Business Information. Jennifer Rummel - VOYAThis sequel to Hazing Meri Sugarman (Simon Pulse/S & S, 2005/VOYA April 2006) picks up right after the drama of Cindy's triumph in the first book. In Meri's absence, Cindy attempts to have a normal life rebuilding the sorority and enjoying college. The college has cracked down on several rules, however, leaving Cindy's popularity in jeopardy. Her happy life fades away when Keith dumps her. Things get worse when Meri returns, hell-bent on revenge and sugarcoated with forgiveness. Her new attitude convinces everyone of her shame and her desire for atonement-everyone except Cindy. When unexplained events start happening to Cindy and her friends, Cindy blames Meri, but no one else believes her. Meri very cleverly stays hidden in the background while Patty becomes hooked on "skinny," the sorority heads in a downward spiral, Lindsay breaks up with her boyfriend, and people start to question Cindy's sanity. With all the drama in her college life, can Cindy survive this latest attack?