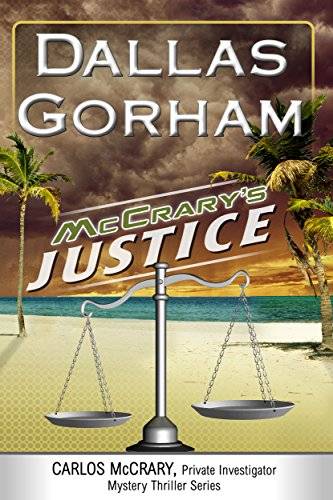 What would you do if your daughter was held by sex traffickers? Nebraska farmer Wilbur Jenkins learns his missing daughter is a sex slave in Port City, Florida. He grabs the next flight to Port City and begs the cops to find her. Is an untouchable diplomat behind the abduction? The only clue is a phone number belonging to Antonio Crucero, a mysterious diplomat from a Caribbean island paradise. The cops can't penetrate Crucero's diplomatic immunity, so Jenkins hires Carlos McCrary, a Private Eye who helps people the cops cannot. Crucero thumbs his nose at U.S. law, but diplomatic status can't protect him from McCrary McCrary uncovers a cesspool of sex trafficking and illegal drugs stretching from South Florida to the Caribbean, and the slimy Crucero is the kingpin of the operation. Crucero fights back and sends his thugs after McCrary. Be prepared for a white-knuckle chase The final showdown with Crucero circles back to McCrary's own home, where he must confront his worst nightmare. McCrary's Justice slices like a machete through a treacherous jungle of new and fearsome enemies, as Chuck McCrary maneuvers inside the gangs and outside the law. Scroll up and grab your copy today! About the Carlos McCrary Series This fast-paced private investigator mystery thriller series has fans all over the globe. If you enjoy gripping thrillers that mix action, suspense, humor, and plot twists -- all with a PG-13 rating -- this series is for you. Find out why N.L. Quatrano said: "Gorham writes the old-time type of good guy/bad guy story with today's immediate action. The Carlos series is one worth reading, especially if you've ever been a fan of Elmore Leonard or Robert B. Parker -- but Carlos McCrary is his own kind of PI. Each book has more twists and turns than the one before. Stories are well constructed and readers will enjoy from beginning to end." What Readers are Saying: "A Binge-Worthy Series! I just binge-read books one through eight. Great series!... these books grabbed and kept my attention." - Jana "Another homerun adventure for Chuck McCrary! I had a hard time putting this book down!... Definitely looking forward to Chuck McCrary's next adventure!" - Marilyn Speaks "McCrary is Back with a Vengeance!... a hard-hitting, soul-crushing, fast-paced novel that grabs you with the first sentence... and doesn't let you go... If the idea of vigilante justice appeals to you and throwing away the rules is entirely justifiable under some circumstances, you are going to love Carlos McCrary and this series." - NL Quatrano "An exciting, action packed read... The plot rolls at breakneck speed, leading McCrary... into bloody battle against drug lords and smugglers... " - Gregg E. Brickman "For these characters to have appeared more real would have been impossible. From the start, you're hooked... The ending was not what I was expecting... sometimes it's not a win-win situation. I'm so happy I received this book for free... looking forward to more books by this author." - Martha Cruz "Dallas Gorham can spin a great tale! This was one of my favorite type of books; Police procedural, action/adventure, and let's have the PI do unofficially what can't be done officially. The outcome was really not expected." - Thomas La Roche "Dallas Gorham... [makes] the reader easily believe he (or she) is in 'the picture'... You'll be glad you did!!" - Benjamin Garrick "This really is 'the book you can't put down.' It won't be the last of his I read!" - Will St. Iver "Dallas Gorham proves he knows how to write a thriller... Plot twists were not foreseeable... You actually feel like you were there when the chapter ends. I will look forward to the author's next book." - Amazon Customer