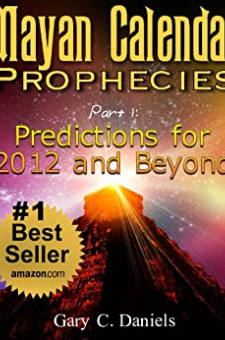 Mayan Calendar Prophecies asks: did the Maya really predict the end of the world on December 21, 2012? If not, then what did the Maya actually predict for 2012? And are the Mayan predictions “prophecies,” i.e., the result of supernatural visions received by shamans or something closer to scientific forecasts based on observed patterns of repeating cycles discovered by their best and brightest minds?The ancient Maya believed that civilizations went through predictable cycles. These cycles repeated every 256 years. The Maya had prophecies or predictions for each of these cycles. These predictions were recorded in their prophetic books known as the Chilam Balam.The Mayan prophetic books of Chilam Balam utilized past events to predict future events. Mayan “prophets” did not simply receive visions and make random predictions. Instead they created a careful analytical system that looked for patterns in past historical events that took place in previous eras and then from these tried to make projections into the future. In fact, this analytical system was very similar to modern scientific forecasting.Mayan Calendar Prophecies is based on the idea that the Maya made predictions, not prophecies, based on careful observations of patterns including astronomical cycles as well as historical cycles of civilization. Just as human beings follow a predictable pattern of development from fetal development through childhood, adolescence and adulthood so, perhaps, do civilizations follow predictable patterns of development.There are primarily two types of 2012 books and websites: “true believers” and “debunkers.” This book offers a third approach, neither “true believer” nor “debunker,” instead it approaches this subject the way a modern futurist would by looking at past events and comparing them to present-day realities in order to create the most probable scenarios and forecasts for the future. This book explores the science of cycle research and looks for naturalistic causes behind the Mayan predictions. Armed with this information, you can draw your own conclusions about the Mayan calendar and its predictions for 2012 and beyond.