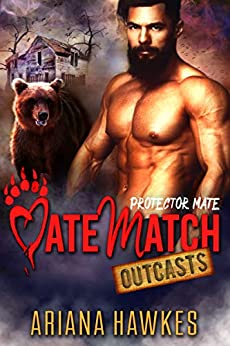 Jagger needs a mate. Fast. He’s running from a dark past and his life as the self-appointed sheriff of the outcast community of Ragtown was supposed to keep him on track. But his duties are pushing his bear to the dark side—not least when a new threat appears in town, with the ability to destroy everyone in it. He needs a woman to stabilize the beast in him, before the animal has turned into one of the criminals he’s trying to pursue. But smart, feisty Rowan is not what Jagger expected.

Rowan is caught between a rock and a hard place. Her father’s business empire is collapsing and he’s pledged her to a mean coyote in an effort to save himself. The only way out? Finding a mate who’s bigger, burlier and growlier than Vex. Jagger Briggs seems to be all that, and more. One look into his eyes and Rowan’s heart is screaming all sorts of trouble. The man is sexy as sin, wild and a fierce protector. But he’s hiding big secrets and when his mysterious past and Rowan’s present collide, they may be both going down hard unless they find a way to set each other free.