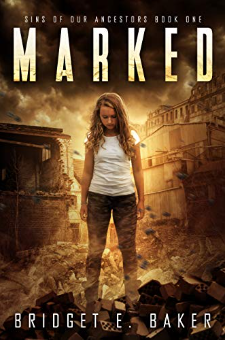 If one touch can infect. . . then a kiss is deadly. All Ruby Behl wants for her seventeenth birthday is a good career path match, and to kiss her best friend and long time crush, Wesley Fairchild. Unfortunately, the simplicity of teenage wishes evaporated a decade ago when the Tercera virus nearly wiped out the human race. Transmitted through touch, the slightest contact is prohibited in the safe haven community of Port Gibson. An innocent game of Spin the Bottle, a rite of passage for Port Gibson’s teens, provides the opportunity Ruby’s been waiting for, but when Wesley winds up Marked, Ruby realizes her first kiss may also be her last. Ruby races the viral clock to uncover long buried secrets about her dead parents, and her once cloudy future becomes clear. She’s the key to finding the cure, but is she willing to pay the price?KIRKUS REVIEWA teenager attempts to find a cure for a deadly, civilization-threatening virus in debut author Baker’s dystopian YA series starter.When Ruby Behl and other 17-year-olds in Port Gibson, Mississippi, get together to play the traditional (but forbidden) game of spin the bottle, she gets the chance to kiss her crush, Wesley Fairchild. It’s only when she sees something on his forehead that she realizes that she’s made a terrible mistake: “That small rash means Wesley is Marked, and in under three years, he’s going to die terribly. And now, so am I.” It’s a symptom of the Tercera virus, which has ravaged the world for the past decade. Ruby presents herself to the authorities to be quarantined, even though the Mark has so far failed to appear on her own forehead. While in her cell, she reads the journals of her father, a prominent virologist who died when she was 6. What she learns changes everything: He created both the Tercera virus and its antidote, but he was murdered before he could alert the world to either. She also finds out that her mother didn’t, in fact, die while giving birth to her. Ruby—a science prodigy—may be the only person who can find the cure by following her father’s clues. Going forward, Ruby may not be able to trust anyone—except maybe Wesley, and her new friend, a security officer named Sam Roth. Overall, Baker’s prose is sharp and vivid (“Pain shoots up my arms and I bite down on an involuntary sob”), and she manages to immediately plunge her readers into the world of the novel. The story is swiftly paced and features some surprising twists and intriguing characters; for example, Aunt Anne, Ruby’s guardian, clearly possesses a few secrets, and later, Ruby encounters King Solomon, the leader of a religious cult. The plot doesn’t challenge the strict boundaries of the dystopian genre, but its combination of sci-fi, mystery, and teen romance still makes for a compelling adventure.A promising YA debut about a girl’s search for a future in the wreckage of the past.https://www.kirkusreviews.com/book-reviews/bridget-e-baker/markede