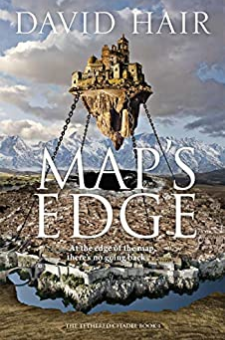 Follow a renegade sorcerer off the edge of the map, in a thrilling adventure perfect for fans of Scott Lynch, Brandon Sanderson and Sebastien de Castell'A page-turning adventure filled with excitement and intriguing characters. For those loving an epic fantasy with plenty of sword-fights, gun-play, bare-fisted combat and battles between sorcerers, this book's for you' Amazing StoriesSoldier, sorcerer and exiled nobleman Raythe Vyre has run out of places to hide. When the all-conquering Bolgravian Empire invaded, Raythe grabbed his daughter Zar and after taking part in a disastrous rebellion, they washed up on the edge of the continent.Now he's found a chance of redemption for himself and the precociously talented Zar: a map showing a hitherto unknown place that's rich in istariol, the rare mineral that fuels sorcery. Mining it will need people, but luckily there are plenty of outcasts, ne'er-do-wells and loners desperate enough to brave haunted roads through the ruins of an ancient, long-dead civilisation, to seek wealth and freedom. But the Bolgravian Empire is not about to let anyone defy it - and even out here, at the edge of the map, implacable imperial agent Toran Zorne has caught Raythe's scent.'There's a lot of cool stuff, ancient civilisations, magic, a heist, personal loss, love, and humour. I enjoyed this so much' Alalhambra Book Reviews