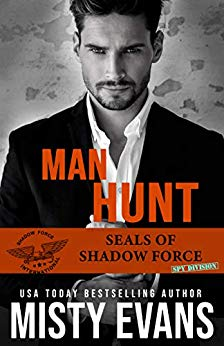 Enemies turn lovers in this hot, new romantic suspense SEALs of Shadow Force spy novel from USA Today Bestselling Author Misty Evans.Ryker Baptiste is one dangerous man. He’s also dead…To protect a young boy, former SEAL Ryker Baptiste faked his own death. He made a promise to the boy’s mother, and he will move heaven and hell—even pretend to be dead—if that’s what it takes to keep the boy safe from his terrorist father.Ryker’s former CIA handler Mia Shaine lost her job because of Ryker. Now she has one chance to stop the terrorist he failed to eliminate and secure her return to the Agency. But it will mean hunting down a dead man and convincing him to once more be her partner.___Shadow Force International: A group of former SEALs, abandoned by the United States and labeled as rogue operatives, now work as a black ops team performing private intelligence, security, and paramilitary missions for those who have nowhere else to turn. Some of them find romance along the way and lose their hearts protecting those they love at all costs.Books in SEALs of Shadow Force, Spy Division:Man Hunt – Ryker and MiaMan Killer – Mick and CassandraMan Down – Aidan and BreeBooks in the SEALs of Shadow Force Series:Fatal Truth – Trace and SavannaFatal Honor – Miles and CharlotteFatal Courage – Jax and RubyFatal Love – Cal and Beatrice; Connor and SabrinaFatal Vision – Colton and Shelby; Connor and Sabrina Fatal Thrill – Jon and JayaRisk – Noah and Jena