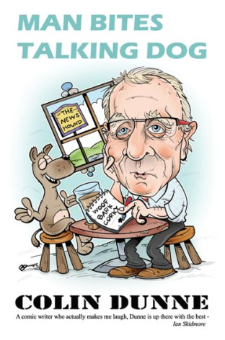 Fleet Street in its glory days of the 1970s and 1980s was the craziest, most extravagant, most competitive and unscrupulous industry in the world.And Colin Dunne was in the thick of it - one of its brightest stars, and most artful dodgers. From a modest start on a weekly newspaper in the Yorkshire Dales, Colin Dunne staggered, via Leeds and Halifax, London, Leamington Spa, Newcastle upon Tyne and Manchester to Fleet Street in its heyday. For fifty years he delighted readers of local, regional and national newspapers and magazines with his uncanny ability to ability to spot – and more importantly to report – the strange, the unlikely and the just plain daft elements of human life.Whether interviewing film star Brigitte Bardot, poet Basil Bunting, or even Corky the Talking Dog, discovering the sexy, red-lit night life of Hamburg, the man-hungry ice maidens of Reykjavik, or even winning the world’s first lawnmower race, Colin Dunne was the man for any assignment that was identifiably barmy and unidentifiably newsworthy. And that no ‘real’ reporter would give the time of day.This is an incredible (but 100% true) account of the Great Days of journalism in the buzzing world hub of the international press that was Fleet Street.It is a must-read for anyone interested in journalism, newspapers - or who simply enjoys the comedy of human life. "A reminder of a better, happier, funnier journalistic era." - Alastair Campbell. "I didn't get where I am today by laughing out loud at other people's books but I've had to make an exception for Colin Dunne's "Man Bites Talking Dog". My involuntary chortles roused many travellers from sleep on the East Coast main line. A useful tip - don't read this in the Quiet Coach." - David Nobbs.'An unashamed celebration of the decades when newspapers had ludicrously deep pockets, valued mischief and celebrated scallywags." - The Oldie. "A romp through his own chaotic life... But it isn't so much the stories that carry one through the pages as his wonderfully witty style." - Roy Greenslade, The Guardian. "I am being forced, by a mixture of character-weakness (can't put it down), by envy of the apparent ease of your self-deprecating writing and by tears of laughter at the antics of your youth to stay up all night and finish it. It's a wonderful read and I'm much enjoying the vast cast of more than colourful characters." - Richard Littlejohn. Colin Dunne is the best-selling author of thrillers including 'Black Ice', 'Blue Murder', and 'Red Alert'.Endeavour Press is the UK's leading independent publisher of digital books.