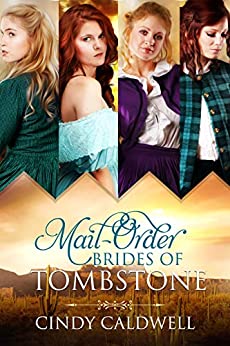 Four very brave ladies look for their happy ever after in 1880s Tombstone. Follow along in this special discounted box set.Book 1 - The Chef's Mail Order Bride
All Sadie had ever known, or ever wanted to know, was being a baker. She'd been raised to bake in her parents' bakery, and after their deaths, she had planned to carry on the family tradition. Devastated to find out she was losing her family's business, she needed something to do to support herself. When she received a letter from her twin sister's husband in Arizona Territory, suggesting she come out to be the bride of his best friend who was opening a restaurant, it seemed like the perfect solution to her problems.
Tripp had gone to the best culinary school in the country, and he knew exactly how to create the perfect meal. He spent hours and hours coming up with just the right menu for his restaurant, only to be told he couldn't get a loan for it unless he married. When his best friend came up with the solution of sending for his baker sister-in-law, it only made sense. Her ideas of the perfect menu were different than his, though. Would the two be able to stay together long enough to convince the bank he was a good risk? Would Sadie be able to convince Tripp that the two of them belonged together after all?
Book 2 - The Wrangler's Mail Order Bride
For Clara Martin, the prospect of moving to New York from snowy Chicago is her only option after losing her bakery job. Resigned to her fate, she prepares to go…until a chance encounter with endangered horses reminds her of a letter she received from her friend, Sadie, asking her to come to Tombstone, Arizona Territory, to marry a horse wrangler, sight unseen.
For Hank Archer, the only son of gentleman rancher Beau Archer, riding the trail has taken its toll. He wants more than anything to stay put on the ranch and when his grandfather leaves him property nearby, he hopes it will be a way to start a new life. The only problem is that to inherit the property, he has to be married.
When Hank’s plans begin to crumble, he finds out that his new bride knows more about horses than he realized. And about people. Can she bring them all together and help Hank realize his dream?
Book 3 - The Bartender's Mail Order Bride
Meg Archer has had enough of being invisible in a family of six girls—especially since the man she’s pining for doesn’t notice her, either. When she finds out he needs a mail-order bride in a hurry, she hatches a plan to get him to notice her, one way or another.
Sam Allen gave up his career ambitions and left New York for Tombstone, Arizona, and a new start. He enjoys his job as a bartender—and is very good at it. But because he knew his mother would not approve, he told a white lie that he never thought would be found out. When his high-society mother unexpectedly decides to make a trip to visit, he needs to make that fib a reality—and fast.
Sam is dismayed to discover that he has only one positive response to his ad—and to say that he is surprised by who it is is an understatement. It also presents him with a dilemma—what to do when the only person who will marry him is someone he shouldn’t be marrying?
Book 4 - The Teacher's Mail Order Bride
Rosemary Archer is tired of just gathering eggs and milking cows. She wants to follow in her sister Meg's footsteps and explore beyond Archer Ranch. When a new headmaster arrives in Tombstone, a position as a student teacher opens up and seems ideal to Rose—if she can get her father to agree. Meg won him over, so hopefully she can, too.
Michael Tate, the new headmaster, is looking forward to the challenge of creating a larger school for the increasing number of children. He is excited about his new role and gets started.
Read more