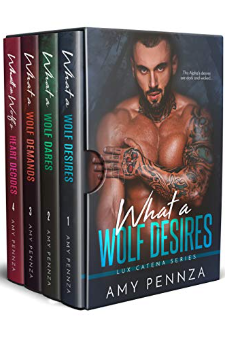 Four hot wolf shifters find their mates . . . and some sizzling romance along the way.Own the complete Lux Catena wolf shifter paranormal romance series—four scorching hot stories you won’t want to put down. Read each book as a standalone, or binge the whole series in order. Whichever way you do it, you’re in for lots of heat and guaranteed happily-ever-afters.Book 1: What a Wolf DesiresWerewolf Lizette Butler has her freedom at last—until her exasperating pack Alpha orders her home . . . and into his bed. Maxime Simard let her walk away once. Now, he’s determined to claim her. When outside forces threaten to keep them apart, they have to fight for their lives and their love.Book 2: What a Wolf DaresWerewolf. Telepath. Frenchman. Master chef. Womanizer. Remy Arsenault is a lot of things, but “settled down” isn’t one of them—at least until he meets Sophie Gregory. As an Alpha’s daughter, she’s off limits. He’s supposed to be escorting her to her wedding, not seducing her. Except he can’t get her out of his head. When she runs from danger and straight into his arms, he’s not sure he can let her go.Book 3: What a Wolf DemandsHe was sent to kill her, not claim her. Dominic Prado is the wolf who brings rogue wolves to justice. When werewolves go bad, he gets to play the bad guy. But when he’s sent to catch a female latent accused of murder in the Louisiana bayou, he didn’t expect to end up caught himself. Lily Agincourt is a trash-talking beauty with flashing green eyes, a body that won’t quit, and a mean right hook. He can’t let her live. Problem is, he’s not sure he can live without her . . . Book 4: What a Wolf’s Heart DecidesBard Bennett is an Alpha alone. With his pack numbers dwindling, he’s got enough problems without babysitting a husband-hunting female from another territory. There are so many reasons he should send Haley Michaels home. She’s half his age, she ignores all his orders, and she has a frustrating habit of ending up in mortal danger. She’s also smart, beautiful, and absolutely captivating. When a threat from his past surfaces, he’ll do anything to keep her safe. He just has to remember he can’t keep her . . .  Bonus! What a Wolf Dreams: A Lux Catena Series PrequelTake a peek at Max and Lizette three years before the events in Book 1.