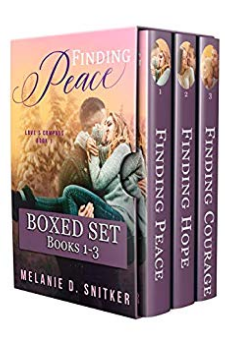 This boxed set includes three full-length novels. Finding Peace, Finding Hope, and Finding Courage are the first three novels in the Love's Compass series.~*~Finding Peace (Book One):Tuck is determined to keep Laurie safe, even if it means risking his own heart in the process.Police Officer Tuck Chandler works hard to protect the citizens of Kitner, Texas. He's also good at holding women at arm's length. Jilted by his fiancée for his dedication to his job, he's not about to open himself up to hurt like that again.Laurie Blake is a struggling photographer. After growing up in a wealthy family, she's determined to make it on her own, even if it means doing it the hard way.When Tuck is assigned to a puzzling burglary involving Laurie's fledgling photography business, he goes into it with his usual perseverance. He wants to help her - if she'll let him. As the case unfolds and the mystery deepens, another question arises.Will their pasts get in the way of a future together?~*~Finding Hope (Book 2):For years, Lance avoided telling Lexi how he felt. He's not about to waste another minute...As a nurse, Lexi Chandler has dedicated her life to helping others, until ovarian cancer rocks her to the core. Accepting assistance herself is much easier said than done. Especially when it means letting Lance, her childhood friend, see her at her worst.Lance Davenport has loved Lexi since they were kids. Between their age difference and bad timing, he's turned burying his feelings for her into an art. Now, watching Lexi's battle with cancer has made him realize just how much time he's lost.Against her better judgement, Lexi has no choice but to lean on Lance as she navigates her way down a path she never dreamed she'd have to travel.Finding Hope is an inspirational romance with a happy ending.~*~Finding Courage (Book Three):With their marriage failing, it takes courage to ask for a second chance...and even more to extend one.For Duke and Avalon McNeil, it was love at first sight. Married within months of meeting, their feet hardly touched the ground until the reality of their haste hit home with startling clarity.Duke's heart shattered when Avalon vanished for nearly three weeks, fleeing their arguments and misunderstandings. Now she's back. He's happy she's home and safe, but he isn't ready to risk everything again when their bond was so easily broken.Avalon's relieved to be home. She's desperate to make peace between them, but returns with a secret. She can't reveal anything to Duke until she proves to him she came back to restore their relationship.As outside pressure continues to threaten Duke and Avalon's fragile foundation, they must find the strength to prove to each other their marriage is worth fighting for.