Love on the Risky Side 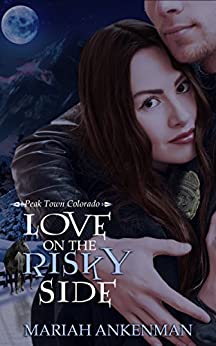 Falsely accused of the murder of her best friend, Kayla Jenkins is on the run for her life. She ends up lost in dark, snowy woods off some backcountry road in the middle of nowhere. Frightened and colder than she’s ever been in her life, she almost thinks she’s hallucinating when a warrior on a white steed saves her.

In all his years as the sheriff of Peak Town, Colorado, Jake Ryder has never come across a half-frozen woman alone in the woods. She’s terrified…and lying to him, yet something about her calls to him on a primal level.

Even with her trust of law enforcement lower than the harsh temperature, Kayla finds it difficult to keep her secrets hidden from the kind and far too handsome sheriff. But as her faith in Ryder grows, she not only risks the real murderer finding her, but losing the one thing she has searched for her whole life and only just found…love.