Looking for Votes in All the Wrong Places 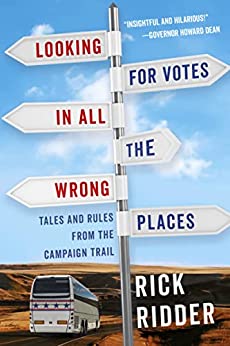 The veteran presidential campaign manager recounts his many adventures, travesties, triumphs, and lessons from more than forty years on the trail.

Over his long and legendary career, campaign strategist Rick Ridder has been at the center of everything from presidential death matches to the legalization of marijuana. In this lively memoir, he recounts his life on the trail from the McGovern campaign to more recent candidates and causes. Along the way, he reveals his “twenty-two rules of campaign management”?each one illustrated by entertaining, instructive, and mostly true stories from his own experiences.

Rick offers an unsparing, often hilarious self-portrait of the political guru as a young man, criss-crossing the country from one drafty campaign headquarters to the next, making mistakes and pulling rabbits out of hats, wrangling temperamental celebrities, winning some elections and losing others.

Through his stories, you’ll meet the state legislature candidate who said he’d win thanks to his reputation as a judge in cat competitions; the US Senate candidate who told the Southern press, “I hate southern accents”; a young Senator Al Gore who campaigned for President in 1988 by eating his way through New York City alongside Mayor Koch; Leonard Nimoy, good-naturedly trekking through rural Wisconsin in Rick’s own Jeep because Rick was too young to rent a more appropriate vehicle; and many other colorful characters.