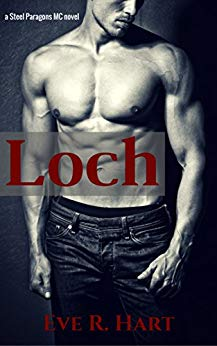 ReaganIt only takes a minute for your life to change. One second to rip away all the security you had. One wrong move to send you running. That is what happened to me. My whole life, all I ever wanted was to have a place to call home. I thought I found that. But then one night everything unraveled. I found myself on the run, fear of what I left behind would catch up to me. With nowhere else to go, I headed to the only place I had ever felt wanted. My grandmother’s.So there I was, hoping that the Big Bad didn’t catch up with me. And in walked Nathan Loch. Known as Loch to his brothers and Vice President of the Steel Paragons MC. From the second he saw me he vowed to protect me.The thing was, we were both doing our best to push the other away. Trying to keep our feelings hidden and afraid to let down our walls. LochLife was pretty good. I had my brothers of the SPMC. I had women crawling into my bed whenever I wanted.Things were simple and easy. Just the way I liked it.Then in walked Reagan, with a busted face and bruises everywhere. I wasn’t sure why, but the moment I saw her my world turned up side down. There was something about her that I couldn’t shake.I knew she was hiding something. She was in some kind of trouble. But the question was, would I figure it out before it found her.While Loch thinks he is too old for Reagan and that he wouldn't be able to balance club life and love of a woman, Reagan is trying her best to keep her secrets hidden. The impending doom that waits around the corner for the club takes priority, but will he realize that she is in trouble before it's too late? Will he be able to save her? And in the end, will they be able to let their walls down enough to realize their feelings? This book has possible triggers and is intended for readers 18 and older.