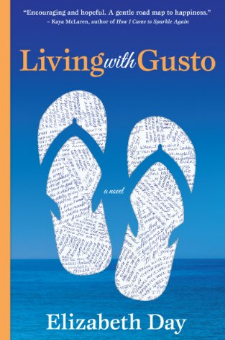 Let's begin at the end. The final words from Ophelia, the narrator:

"I sometimes wonder if I did it on purpose, if I consciously broke everything in my life that was working. And if so, if I had known how it would feel to have my husband unable to look at me, if I had realized my daughter and I would go months without speaking, and if I had understood the extent of the destruction I would bring to the life we had built, would I have still done it? Would I have still made that single decision that became the turning point in our lives?

"I still wonder. Had I not created that catalyst that landed me in the grip of despair, would I have been able to hear Gusto telling me, “The suffering needs to end”? Or would the suffering have remained as silent as his voice had become?

"For now, I’ll do as Gusto once asked me to do when the answers were mine to create. I’ll let the questions roll on the backs of waves until the ocean of time turns them into something I want to reach out to and pull to me, until clarity surfaces and I want nothing less than to embrace it like the sweetness of a mango.

"For now, I have the one answer that matters. I know who I am. I am Ophelia."