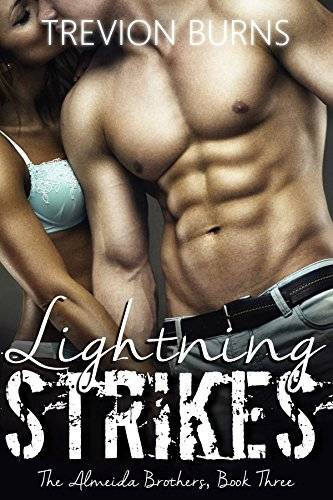 No money. No ID. No way home. Uptight attorney Jack Almeida is still reeling from a devastating loss when he finds himself saddled with an unorthodox seatmate on an ill-fated flight to New York. Blinded by heartbreak, Jack is unmoved by Nina Grammio's inviting smiles and relentless attempts at conversation. It didn't matter that she smelled like heaven on Earth, had a face that belonged on a black Barbie doll, and was filling out those leather pants so alluringly it should've been illegal. Jack had no interest in making small talk, making friends, or even making love. Not with anyone, and especially not with Nina. That is, until their plane lost an engine, and went careening to the ground... Strong sexual content Strong language LIGHTNING STRIKES is an interracial romance. It is book three of The Almeida Brothers Trilogy, and can be read as a stand alone novel. Book One: Lila's Thunder Book Two: Thunder Rolls Book Three: Lightning Strikes