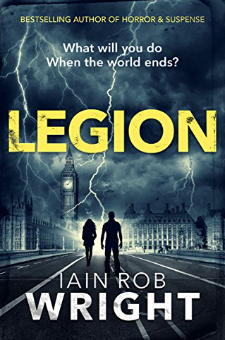 A world ending thrill ride of epic proportions. With so many characters and so many twists, it's like the horror equivalent of Game of Thrones.Humanity bleeds, its jugular torn and bleeding.The world needs heroes...But all it has is darkness.People need to stand and fight...Before it's too late.Continue the epic story of mankind’s epic struggle against extinction in Book 2 of the “Hell on Earth Series”: LEGION.What will you do when the world ends? A question that needs answering quickly when the gates to Hell open all over Earth. Taking place across the globe is an apocalypse like no other, and humanity finds itself at war against a smart and merciless foe. A foe that knows no bounds to suffering.Vamps has never been anything more than a kid on the streets, but when those streets become a war zone, he and his childhood friends are forced to step up and become heroes—not an easy thing to do for a bunch of gangsters. It doesn’t help matters that a rival gang is also out for their blood.Hernandez is a US Navy Lieutenant with a bright, neatly planned future. That is until the world ends and a chance encounter with a rogue Coast Guard Captain leaves his future in disarray. It will take a lot of hard work, planning, and manipulation to take back the reigns of his destiny, and punish those who have crossed him.Richard Honeywell is a police office at a time when being a police officer is a death wish. The world is at war, but Richard still has a duty to protect the citizens of the United Kingdom. Yet, how can he do that when his own family is in danger?The world must come together and fight back against the unstoppable Legions of Hell. The monsters are real and they will not stop. Welcome to Hell."Iain Rob Wright is sick and twisted." - David Moody, author of the Autumn series."Iain Rob Wright scares the Hell out of me."" - JA Konrath, author of Afraid.