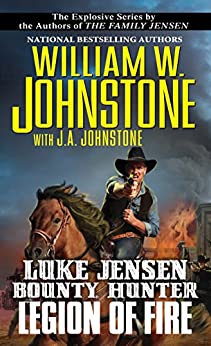 Luke Jensen’s got an outlaw gang in his sights. Sharp-shooting Western adventure from the bestselling authors of the Preacher & MacCallister series.

Luke Jensen comes from a righteous brood. Survival is in his blood. And he’s burned enough gunpowder to forge out his own legend on the frontier as the toughest bounty hunter who ever stalked his prey . . .

When Luke Jensen traps fugitive Ben Craddock in Arapaho Springs, he’s ready to collect on his bounty. But the job’s not done—not by a long shot. A raid by a savage gang known as the Legion of Fire has left the peaceful settlement looted, burned to the ground, and the ashes scoured for female hostages—including the marshal’s daughter. For Luke this is more than a hunt. It’s now a rescue. And with Craddock busted out of jail and thrown in with the gang, it’s also revenge. Wrangling a small posse, Luke heads for the Legion’s hideout in the Kansas badlands. Outnumbered, they can’t risk an ambush. Instead, it’s going to take cutthroat cunning for the outlaws of the Legion of Fire to go down in flames—one by one.

Praise for the novels of William W. Johnstone

“[A] rousing, two-fisted saga of the growing American frontier.”—Publishers Weekly on Eyes of Eagles

“There’s plenty of gunplay and fast-paced action as this old-time hero proves again that a steady eye and quick reflexes are the keys to survival on the Western frontier.”—Curled Up with a Good Book on Dead Before Sundown Read more