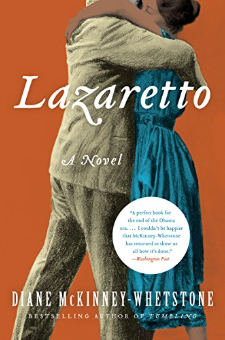 “Vibrant. . . . Completely engaging. . . . A unique blend of poetic language and graphic depictions of the injustices suffered by African Americans in the post-Civil War period.”— Booklist (starred review)Diane McKinney-Whetstone's stunning historical novel, Lazaretto, begins in the chaotic back streets of post-Civil War Philadelphia as a young black woman, Meda, gives birth to a child fathered by her wealthy white employer. In a city riven by racial tension, the father’s transgression is unforgivable. He arranges to take the baby, so it falls to Sylvia, the midwife’s teenage apprentice, to tell Meda that her child is dead—a lie that will define the course of both women’s lives. A devastated Meda dedicates herself to working in an orphanage and becomes a surrogate mother to two white boys; while Sylvia, fueled by her guilt, throws herself into her nursing studies and finds a post at the Lazaretto, the country’s first quarantine hospital, situated near the Delaware River, just south of Philadelphia.The Lazaretto is a crucible of life and death; sick passengers and corpses are quarantined here, but this is also the place where immigrants take their first steps toward the American dream. The live-in staff are mostly black Philadelphians, and when two of them arrange to marry, the city’s black community prepares for a party on its grounds. But the celebration is plunged into chaos when gunshots ring out across the river.As Sylvia races to save the victim, the fates of Meda’s beloved orphans also converge on the Lazaretto. Here conflicts escalate, lies collapse, and secrets begin to surface. Like dead men rising, past sins cannot be contained.