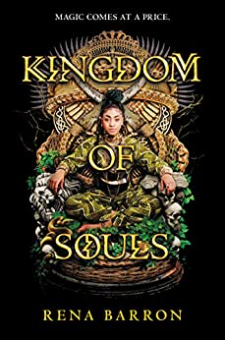 A girl with no gifts must bargain for the power to fight her own mother’s dark schemes—even if the price is her life. Crackling with dark magic, unspeakable betrayal, and daring twists you won’t see coming, this explosive YA fantasy debut is a can’t-miss, high-stakes epic perfect for fans of Legendborn, Strange the Dreamer, and Children of Blood and Bone.“Magnetic and addictive. This book is black girl magic at its finest.”—New York Times bestselling author Dhonielle ClaytonHeir to two lines of powerful witchdoctors, Arrah yearns for magic of her own. Yet she fails at bone magic, fails to call upon her ancestors, and fails to live up to her family’s legacy. Under the disapproving eye of her mother, the Kingdom’s most powerful priestess and seer, she fears she may never be good enough.But when the Kingdom’s children begin to disappear, Arrah is desperate enough to turn to a forbidden, dangerous ritual. If she has no magic of her own, she’ll have to buy it—by trading away years of her own life.Arrah’s borrowed power reveals a nightmarish betrayal, and on its heels, a rising tide of darkness that threatens to consume her and all those she loves. She must race to unravel a twisted and deadly scheme… before the fight costs more than she can afford.Set in a richly imagined world inspired by whispered tales of voodoo and folk magic, Rena Barron’s captivating debut is the beginning of a thrilling saga about a girl caught between gods, monsters, and the gift and the curse of power. “Masterful.” —SLJ (starred review)