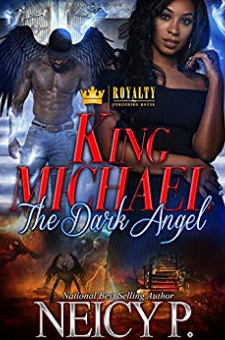 King Michael, The Dark Angel, has always put others before him and he feels that he has earned the right to sit back, relax and enjoy himself... after he puts his life and everything else on the line one last time for his family. ?One failed attempt on his life after another is thwarted but right when he believes that all hope is lost, he sets his eyes on Ariella. One glance and he knows that she is his true destiny and come hell or high water, he won't allow anyone to steal the bright future he now sees that he can have with this queen by his side. ?Ariella, a strong, independent boss in her own right, has always followed the rules and never questions the edicts and decisions of those ranked higher than her. She unquestioningly takes on the assignment to bring King to his knees. What she doesn't expect is for her feelings to overcome her faith and blind her from the truth... or is it that she was deceived and now her eyes are finally wide open? ?King Michael and Ariella have an instant, undeniable attraction to one another, but the question is, are they truly destined to be together or will Ariella carry out the orders of the elders sacrificing her and King's chance at a happily ever after?