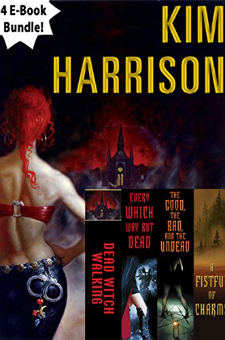 Get the first four novels in Kim Harrison's #1 New York Times bestselling Hollows series as one e-book! This bundle includes Dead Witch Walking, The Good, the Bad, and the Undead, Every Which Way But Dead, and A Fistful of Charms. Discover this great series at a special price!Dead Witch WalkingAll the creatures of the night gather in "the Hollows" of Cincinnati, to hide, to prowl, to party ... and to feed. Vampires rule the darkness in a predator-eat-predator world rife with dangers beyond imagining — and it’s Rachel Morgan'sjob to keep that world civilized. A bounty hunter and witch with serious sex appeal and an attitude, she'll bring 'em back alive, dead ... or undead.The Good, the Bad, and the UndeadIt's a tough life for witch Rachel Morgan, sexy, independent bounty hunter, prowling the darkest shadows of downtown Cincinnati for criminal creatures of the night. She can handle the leather-clad vamps and even tangle with a cunning demon or two. But a serial killer who feeds on the experts in the most dangerous kind of black magic is definitely pressing the limits. Confronting an ancient, implacable evil is more than just child's play — and this time, Rachel will be lucky to escape with her very soul.Every Which Way But DeadRachel Morgan's back! Bestselling author Kim Harrison returns with a new supernatural adventure that fans of Laurell K. Hamilton and Charlaine Harris won't want to miss. Some days, you just can't win. Witch and former bounty hunter Rachel Morgan's managed to escape her corrupt company, survive living with a vampire, start her own runner service, and face down a vampire master. But her vampire roommate Ivy is off the wagon, her human boyfriend Nick is out of town indefinitely and doesn't sound like he's coming back while the far-too-seductive vampire Kisten is looking way too tempting, and there's a turf war erupting in Cincinnati's underworld. And there's a greater evil still. To put the vampire master behind bars and save her family, Rachel made a desperate bargain and now there's hell to pay—literally. For if Rachel cannot stop him, the archdemon Algaliarept will pull her into the sorcerous ever-after to forfeit her soul as his slave. Forever.A Fistful of CharmsThe evil night things that prowl Cincinnati despise witch and bounty hunter Rachel Morgan. Her new reputation for the dark arts is turning human and undead heads alike with the intent to possess, bed, and kill her — not necessarily in that order. Now a mortal lover who abandoned Rachel has returned, haunted by his secret past. And there are those who covet what Nick possesses — savage beasts willing to destroy the Hollows and everyone in it if necessary. Forced to keep a low profile or eternally suffer the wrath of a vengeful demon, Rachel must nevertheless act quickly. For the pack is gathering for the first time in millennia to ravage and to rule. And suddenly more than Rachel's soul is at stake.