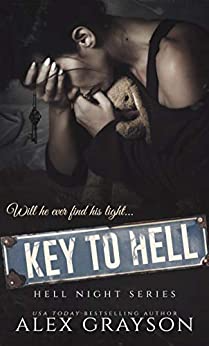 The highly anticipated conclusion of the Hell Night Series. Emo's story.Death. Destruction. Pain. A soulless void. It’s his life. It’s his reality.Emo doesn’t feel. Anything. His soul is dark and filled with hatred. People in the small town of Malus watch him with fear, with reverence. Exactly the way he prefers it.Guilt surrounds him, caging him in an ominous past he refuses to let go. Can’t let go. His past is responsible for the shell of the man who now exists. He doesn’t know any other way to survive.]The woman who haunts his dreams is his only salvation. He’s hurt her over and over again. He didn’t have a choice.The key he holds on to, the one he uses to carve into his flesh, is the key to his hell. It’s his reminder of the pain he’s suffered and inflicted.Will there be retribution? Can Emo be saved? Or is he destined to live in this dark hell he’s surrounded himself in for the rest of his life?DISCLAIMER: Intended for readers 18 years and older do to adult language, dark and harsh situations, and sexual content.