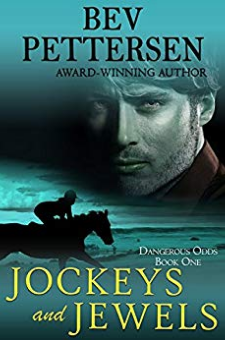 The first rule of an undercover cop: Never fall in love with the suspect!National Readers Choice Award FinalistRomance Writers of America® Golden Heart® FinalistKurt MacKinnon resists being dragged back into undercover work. But when his former partner is murdered, he ships his third-string Thoroughbreds to the backwater track where his friend was last seen alive. He intends to make someone pay, even if the killer turns out to be a talented rider with a smoking hot body and a disarming smile.Julie West is chasing an elusive win, struggling to climb the competitive jockey ranks. There's no time for love but it's hard to ignore the magnetic new trainer in town. She agrees to work for Kurt, never suspecting she's already a person of interest--and it's not because of her riding skills.Kurt never expected his hot-blooded colt to flourish under Julie's feminine touch or for his own cynical heart to soften. But when his investigation tightens around the truth, will he be able to keep the woman he loves safe?"Jockeys and Jewels is a sparkling jewel of a romance--clever, entertaining, and touching," -- Julianne MacLean, USA Today Bestselling Author" "A love affair in the midst of murder at the racetrack. Well-paced novel full of intrigue and romance!" Amazon ReviewerDangerous Odds Series:Jockeys and JewelsColor My HorseFillies and FemalesRedemption Series:Riding For RedemptionA Scandalous HusbandBackstretch BabyLast Chance Series:Thoroughbreds and Trailer TrashStuds and StilettosMillionaire's ShotMustang River Ranch Series:Shadows of the MountainAlong Came A Cowboy