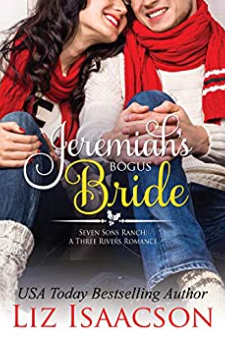 He wants to prove to his brothers that he's not broken. She just wants him. Will a fake marriage heal him or push her further away?Jeremiah Walker moved to Three Rivers three years ago with one rule: No women. Period. The end.He doesn't need to be left at the altar again, and his heart bears some deep wounds that still affect him. But he's watched three of his brothers find someone to love, and even he can admit that his love of ranching and cooking can only take him so far. Meanwhile, Whitney Wilde will not leave him alone about shooting out at Seven Sons Ranch. The photographer has talent, sure. She also has perfectly kissable red lips that haunt Jeremiah in his quiet moments.Whitney shoots brides to pay the bills, but what she really wants to do is an obscure type of baby photography she hasn't told anyone about. She has a website under a fake name, and she swears all of her clients to secrecy. She's as attracted to the drop-dead gorgeous cowboy as she is annoyed by his refusal to let her onto his property. Doesn't mean she's going to give up.And when Jeremiah calls with a favor of his own? Whitney isn't sure if she should laugh at him the way he has her so many times or jump at the chance to become his bogus bride. As they spend more time together on and off the ranch, Whitney will have to decide if she can open up to him and tell him where her true love lies. And Jeremiah will have to tell her all about those scars on his heart... Will a fake marriage be the thing to heal his heart and bring them closer together? Or will he be left at the proverbial altar again?