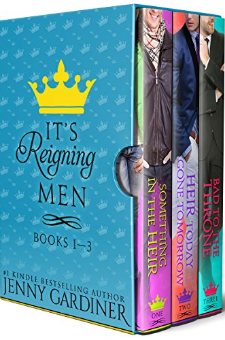 It’s time to get your royal on with the first three books in the It’s Reigning Men series from bestselling author Jenny Gardiner, available together for the very first time!SOMETHING IN THE HEIR Sometimes a girl’s gotta sweep a prince off his feet…He’s a prince with a problem, she’s a commoner with a getaway plan. Modern-day Prince Adrian of Monaforte has a most old-fashioned problem: his demanding mother wants him wed to her best friend’s daughter, the hard-partying Serena. When his refusal falls on deaf ears, Adrian decides it’s time for him to slip away from his gilded cage and figure out his life, all on his own. As luck would have it, event photographer Emma Davison, weary of a revolving door of lost-cause men and tired of her outsider-looking-in career, is in need of her own escape clause, just in time to help a wayward prince in need. And she soon discovers that sometimes a girl’s gotta sweep a prince off his feet. For any girl that’s ever held out hope that some day her prince would come…or better yet, hoped that some day she’d come to him. HEIR TODAY GONE TOMORROW It's all fun and royal games until somebody's heart gets hurtIn his line of work, royal heir Darcy Squires-Thornton has always been content playing second fiddle to close friend Prince Adrian, and happy, too, with whatever brief romantic encounters come his way. Especially one with carefree Caroline McKenzie, whose best friend is engaged to the prince, whose motto has always been "love the one you're with". But when the one she's no longer with is the one with whom she's fallen in love, what's a girl an ocean away to do?BAD TO THE THRONE Sometimes you can let your heir down a little too much… When wild-child Prince Alexander goes on a naked bender in a Vegas swimming pool, cocktail waitress Andi McDonough decides to preserve a shot of those family jewels on her phone. But when she’s fired for capturing the royal treasures, she heads off to find herself. After backpacking the world-over on a dime and a prayer, she finds herself in Rome, where a chance encounter with the wayward prince only reinforces to her that Prince Zander is indeed bad to the throne. And more than likely to her fragile heart as well.