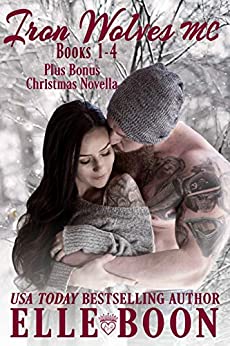 Get the First 4 books in the Best Selling Iron Wolves Series, Plus The Bonus Christmas Novella only available here. by USA Today Bestselling Author Elle Boon

Four larger-than-life alphas. Four sexy as sin heroes. Four complete stories that will capture all your emotions in one complete set plus a bonus story available nowhere else. Fall in love with the Iron Wolves men today!
LYRIC'S ACCIDENTAL MATE, book 1
Lyric Carmichael is a shifter in trouble. When a pack of rogue wolves attacks, she's in a fight for her life. Rowan Shade is an ex-Navy SEAL and was used to war. So, wading into the middle of a fight to save a gorgeous woman seemed like second nature. However, he hadn't anticipated being bitten by the gorgeous Lyric. Of course, the alternative would've been a fate worse than death, not to mention when Lyric's teeth sank into him, it had been one of the most erotic experiences in his life. He just hopes they live long enough to explore more of this new and wild world.

XAN'S FEISTY MATE, book 2
Breezy loves Xan with all her heart, but after years of trying to get him to notice her, she's ready to give up. Xan didn't think he wanted a mate, didn't think he was good enough for the female who called to his wolf, but as he realizes she's ready to walk out of his life, he dared anyone to stop him from claiming what was his. Just when they find peace, the past rears its head, threatening to destroy both their lives, only they hadn't counted on the bond between an alpha wolf and his mate.

Kellen's Tempting Mate, book 3
He was he the big bad alpha, except when it came to one tiny female, his mate. Laikyn made no secret of her love of the Iron Wolves alpha, but her heart couldn't handle watching him deny her. He was determined to protect, even from himself, until he finds she has dark desires that matches his. Of course, the universe was a tricky thing, throwing in beings they'd never known existed, but Kellen would battle Satan himself to protect and claim his mate.

Slater's Enchanted Mate, book 4
LeeLee spent years stuck as a wolf, thinking she'd never transform until fate brought her face-to-face with her mate. Slater knew his mate was out there, he just hadn't anticipated she'd be so wounded. Although the first half of LeeLee's life hadn't been easy, Slater vows to do all he can to make the rest with him as beautiful as she is, if only her past would stay buried.

TRUE LOVE DOESN'T ALWAYS COME EASY… For these shifters, it definitely didn't, but in the Iron Wolves Christmas novella, there's bound to be more than just mistletoe and eggnog. #babies #xanispracticingstill

“A must-read story,” New York Times bestselling author LORA LEIGH
“Ms. Boon always writes a fantastic story”. USA Today Bestselling Author PATRICIA RASEY
“Elle Boon’s MC has it all—dangerous, compelling men, and smart, sassy women.” New York Times & USA bestselling author N.j. Walters.
** From USA TODAY Bestselling Author... her Iron Wolves Series are Bestselling, Sexy, Alpha, Bad Boys, and Tough Heroines With Lots of Twists and And Turns. If you like your stories with laugh-out-loud, sexy-as-heck, OH MY GAWD did I just read those moments, then you'll love these stories. Get ready for one heck of a twisted and wild tale that will have you laughing, gasping, and possibly crying. Yet I promise you'll be so darn satisfied you'll be asking for an Iron Wolf of your very own.
Read more