In the Wrong Sights 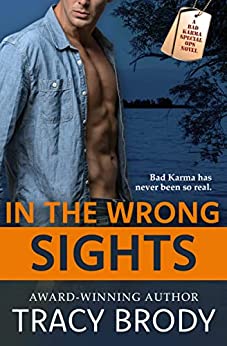 A TRAUMA NURSE THE CARTEL WANTS DEAD
Cassidy O’Shea overheard what should have been a patient’s deathbed confession—except the cartel hitman lived. She’s lost two years of her life being in witness protection, but nothing will stop her from attending the funeral of Hal, her ex-stepfather and the only father figure she’s ever known. Except her quick trip to Fort Bragg is exactly what an assassin hoped for.

AN ELITE SOLDIER WANTING JUSTICE
Learning his Special Ops mentor was murdered, AJ Rozanski’s suspicions turn to Hal’s mysterious stepdaughter who appeared at the funeral. He’s stunned to learn her testimony is needed to bring down the head of a major arms cartel. When the marshals request the Bad Karma team’s aid to persuade Cassidy to stay in the Witness Protection program, AJ is determined to convince her to do the right thing—and to find Hal’s killer. He’s supposed to be protecting her, not falling for a woman he may never see again.

A PAWN IN THE JUSTICE SYSTEM
An attempt on her life sends Cassidy to the only people she trusts—and back into AJ’s arms. His team sets a trap for the assassin who killed Hal, but that won’t end the threats to Cassidy and her family. The only way to escape spending her life in WITSEC is for the hitman she helped save to testify against the head of the arms cartel, except he’s not motivated to talk. Can she outlast and outwit him in a deadly game of survival?
Heat level: Steamy. Contains sexual content/on the page. Not overly explicit.
Profanity: Moderate (These are military characters)
Contains hunky heroes, a strong female heroine, and a military working dog.