In the Middle of Somewhere 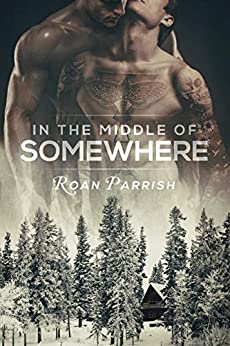 Daniel Mulligan is tough, snarky, and tattooed, hiding his self-consciousness behind sarcasm. Daniel has never fit in—not at home in Philadelphia with his auto mechanic father and brothers, and not at school where his Ivy League classmates looked down on him. Now, Daniel’s relieved to have a job at a small college in Holiday, Northern Michigan, but he’s a city boy through and through, and it’s clear that this small town is one more place he won’t fit in.

Rex Vale clings to routine to keep loneliness at bay: honing his muscular body, perfecting his recipes, and making custom furniture. Rex has lived in Holiday for years, but his shyness and imposing size have kept him from connecting with people.

When the two men meet, their chemistry is explosive, but Rex fears Daniel will be another in a long line of people to leave him, and Daniel has learned that letting anyone in can be a fatal weakness. Just as they begin to break down the walls keeping them apart, Daniel is called home to Philadelphia, where he discovers a secret that changes the way he understands everything.

Here's what readers are saying:

"Hands down one of the best books I have read in romance. The MCs are compelling and richly nuanced, the plot is twisty and unexpected, and the writing is simply amazing." —A reader

"This is exactly what I look for in a contemporary romance." —A reader

"One of the best, most intense, slow, amazing relationships I have had the pleasure of reading." —A reader

"This book grabbed me by the gut and wrapped itself around my heart." —A reader