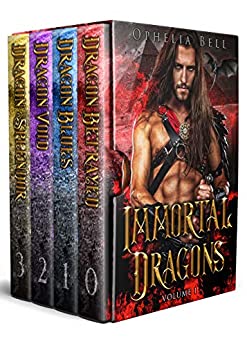 Even immortal dragons can have crazy exes.

Belah’s ex is worse than most. Three thousand years ago, she and her old lover took their kinks just a step too far, and she’s been trying to get over it ever since. The problem is that her ex is still out there wreaking havoc on her world, while Belah spent the last three millennia in hiding. She finally vows to move on with her life, and finds new mates in a pair of brothers who satisfy her cravings without compromising her loyalty to her race.

But when her old lover returns vowing to win her back, her plans for a fresh start are turned upside-down. Can he redeem himself enough to find his way back into her heart? Will her new mates make room for a man who was once their mortal enemy?

And even worse, what will her brothers and sisters think? Because they all have a stake in what she decides, and they all have secrets that they'd prefer remain buried along with Belah's past.

Follow Belah and her siblings, six immortal dragon shifters known as the elusive "Dragon Council" as they seek out their fated mates. These six dragons are the lawmakers of their kind, but they aren't immune to Fate's edicts any more than the rest of their race. Who can say which one made the biggest mistake, or has the darkest past? They all have heavy weights to carry, but when Fate sends them prophetic dreams of the mates they are meant for, they know better than to ignore the call.