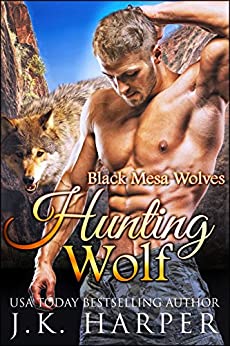 "I am glad I gave J.K. Harper a try! I love her shifter world! She's created a wonderful world and characters that captured my attention from the first chapter. This is my favorite in the series so far." -Night Owl Reviews, 4.5 Top Pick

Caleb Bardou has a quick answer for anything that comes at him: his fists. Barreling through life, damn the consequences, has always worked for him. With dangerous rogue wolves threatening his Pack, he must be a ruthless hunter. But when a delicate little she-wolf gets in his steamroller way, he has to find a different strategy to win the unexpected battle for her body and her heart.

Each time civilized Rielle Amoux thinks about caveman Caleb, she gets all tingly inside. Yet she refuses to be flustered by a hot-headed, chest-thumping, he-man of a wolf. Except Caleb is sexier than sin, and he arouses her on a primal level--the part of her she's always denied from fear she won't be able to control it. But if she doesn't free her wild side soon, she risks losing her wolf forever....

Between vicious rogues and sweetly seductive Rielle, Caleb has his hands full. Just when he thinks he has everything under control, his trigger temper erupts again. This time, the fallout could be disastrous for his Pack--as well as for any chance he has with the sexy little wolf who might be his destiny.

Other books by J.K.: