Huddle With Me Tonight 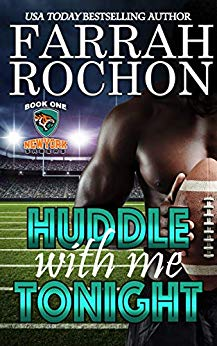 Originally Published by Harlequin Kimani Romance – September 2010Entertainment columnist Paige Turner is known for getting under the skin of the people whose books she reviews on her popular blog. When her criticism of NFL standout Torrian Smallwood’s cookbook/memoir goes viral, it sparks an online war between the city’s most beloved blogger and one of football’s hottest stars. Torrian couldn’t care less what some book blogger thinks about his upcoming memoir. His main focus is on making a success of the new restaurant he’s opening for his sister. That is, until he meets the gorgeous Paige Turner face-to-face. When a local TV station invites them to bring their online battle into the kitchen in a reality TV cook-off, Torrian comes up with a new goal: making Paige his. Will either of them be able to stand the heat, or will they succumb to the white-hot attraction that neither can deny? Reading order:Book 1: Huddle With Me TonightBook 2: I'll Catch YouBook 3: Field of PleasureBook 4: Pleasure Rush