How to Write a Damn Good Mystery 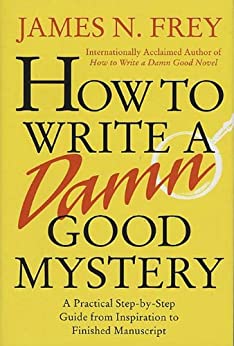 Frey urges writers to aim high-not to try to write a good-enough-to-get-published mystery, but a damn good mystery. A damn good mystery is first a dramatic novel, Frey insists-a dramatic novel with living, breathing characters-and he shows his readers how to create a living, breathing, believable character who will be clever and resourceful, willful and resolute, and will be what Frey calls "the author of the plot behind the plot."

Frey then shows, in his well-known, entertaining, and accessible (and often humorous) style , how the characters-the entire ensemble, including the murderer, the detective, the authorities, the victims, the suspects, the witnesses and the bystanders-create a complete and coherent world.

Exploring both the on-stage action and the behind-the-scenes intrigue, Frey shows prospective writers how to build a fleshed-out, believable, and logical world. He shows them exactly which parts of that world show up in the pages of a damn good mystery-and which parts are held back just long enough to keep the reader guessing.

This is an indispensable step-by-step guide for anyone who's ever dreamed of writing a damn good mystery.