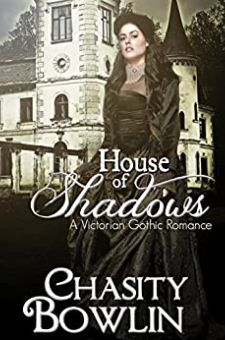 House of Shadows is Part One of a three part series. Both Veil of Shadows, Part Two and Passage of Shadows, Part Three, are avalable on Amazon, as well. After losing her father and nearly losing her life when their ship sank off the coast of Cornwall, Adelaide Hampton Parke is faced with a terrible dilemma. Her stepmother has demanded that they immediately set sail for New York but the very idea of stepping foot on board another ship and facing the uncertainty of a Transatlantic crossing leaves her paralyzed with fear. Not to mention that her relationship with her stepmother is contentious at best and she's been given only six months to return to New York and find herself a husband or be put out of the family's Park Avenue home to make her own way in the world. Salvation comes, unexpectedly, in the form of a telegram from Eldren Llewellyn a Welsh lord and the sole owner of a mining empire. He'd partnered with her father in multiple business ventures, and upon the man's death, proposed to Adelaide in order to spare her the ordeal of returning home in her stepmother's less than tender care. But as she travels to his remote estate in Snowdonia, Adelaide comes to realize that his ancestral home, Cysgod Lys, literally the Shadow Hall, is filled with secrets and dark things she cannot name. Fear is her constant companion and she begins to wonder if her new husband is her savior... or her doom.**** Please note that this is a true trilogy. It isn't three interconnected stories, but one story told over the span of three books. Each book can be read as a complete story on its own, though it will help to read them in order. They will be published in fairly quick succession at about eight weeks apart. The standard length for a novel is 45,000 words to 90,000 words. This series, when complete, will be 150,000 words in total. That was simply too much for one book and that is why it is being told in parts. Thank you. ****