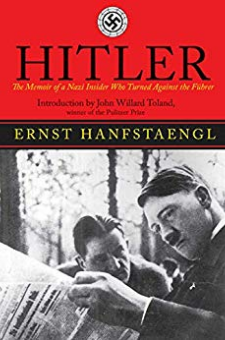 Of American and German parentage, Ernst Hanfstaengl graduated from Harvard and ran the family business in New York for a dozen years before returning to Germany in 1921. By chance he heard a then little-known Adolf Hitler speaking in a Munich beer hall and, mesmerized by his extraordinary oratorical power, was convinced the man would some day come to power. As Hitler’s fanatical theories and ideas hardened, however, he surrounded himself with rabid extremists such as Goering, Hess, and Goebbels, and Hanfstaengl became estranged from him. But with the Nazi’s major unexpected political triumph in 1930, Hitler became a national figure, and he invited Hanfstaengl to be his foreign press secretary. It is from this unique insider’s position that the author provides a vivid, intimate view of Hitler—with his neuroses, repressions, and growing megalomania—over the next several years. In 1937, four years after Hitler came to power, relations between Hanfstaengl and the Nazis had deteriorated to such a degree that he was forced to flee for his life, escaping to Switzerland. Here is a portrait of Hitler as you’ve rarely seen him.