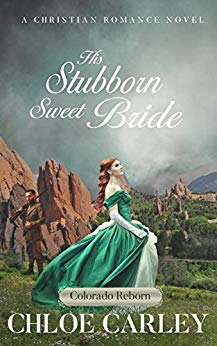 Was a letter delivered to the wrong person or was God in it?When Englishman Nate Trowbridge inherits his uncle’s American ranch, he and his sister Leonie travel to Colorado. Nate plans to become a gentleman rancher and to marry Emmaline Chiswick, the daughter of family friends in Denver.But Nate’s orderly world is turned upside down when his proposal letter to Emmaline is accidentally delivered to the wrong woman. When a redheaded adventuress arrives on his doorstep, demanding that he honor his offer of marriage, Nate is outraged at her nerve but also attracted to her beauty.But when Molly Clanahan refuses to be bribed and also refuses to leave his house, Nate finds himself on the horns of a dilemma. In his wealthy social circles, where reputation is everything, the presence of a voluptuous unmarried woman in his home is a recipe for disaster.But the longer Molly stays, the more Nate begins to suspect that she isn’t the greedy gold digger that she seems. He starts to believe that she’s taken refuge in his home because she’s hiding from something.Or someone.When Molly suddenly disappears, Nate decides to solve the mystery of her real identity and plunges into a series of events that will threaten his reputation, challenge his courage, and bring him face to face with pure evil. Because the search will take him to the lowest and vilest places in the West, and force him to decide if the truth is really what he wants.Or if he wants Molly herself."His Stubborn Sweet Bride" is a stand-alone Christian Historical Romance Novel of approximately 80,000 words and around 400 pages. No cheating, no cliffhangers, and a guaranteed happily ever after.Thank you!