His First His Second 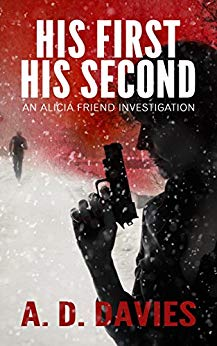 Meet Detective Sergeant Alicia Friend. She’s nice. Too nice to be a police officer, if she’s honest.Now the annoyingly-perky detective finds herself in the grip of a northern British winter, investigating the kidnap-murders of two young women. When a third is taken, Alicia has less than a week to chip away the secrets of a high-society family, and uncover the killer’s objective. But Richard - the father of the latest victim - believes the police are not moving quickly enough, so launches a parallel investigation, utilising skills honed in a dark past that is about to catch up with him. As Richard’s secret actions hinder the police, the clock is ticking until another innocent person dies, and Alicia will be forced into choices that will impact the rest of her life. ??? Reviews CrimeFictionLover.com “An intriguing mix of police procedural and serial killer thriller, that will tease, involve and unnerve you. An entertaining and intriguing debut.” Undercover Book Reviews: “Want a book with twists and turns? This is the one. It will not disappoint.” For a chilling serial killer thriller with a quirky main character, pick up His First His Second today!Alicia Friend Books in Order:1. His First His Second2. In Black In White3. With Courage With Fear4. A Friend In Spirit5. To Hide To Seek (novella)6. A Flood of BonesAlso available: Box set: Alicia Friend Investigations Box Set Books 1-3