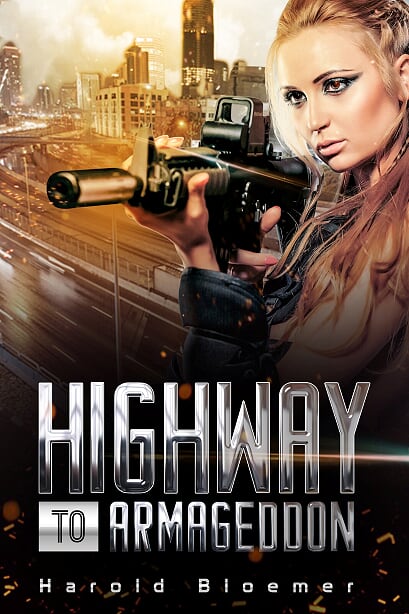 In the year 2150, a trio of young bounty hunters attempt to stop an enigmatic cult leader from unleashing nuclear Armageddon. An action-packed, sci-fi thriller.

In the not-too-distant future, climate change has wreaked havoc upon the world, decimating the global economy and bringing the United States and China perilously close to nuclear war. In order to make ends meet, 18-year olds Lance and Boom Boom work as bounty hunters. As it turns out, they're pretty damn good at catching crooks. With their sassy and voluptuous side-kick, Krystal, there’s no criminal these teen bounty hunters can’t track down. Their streak of outwitting bad guys comes to a screeching halt, however, when one of their targets, Caesar Dominguez, turns the tables and puts a bounty on their heads… a cool $10 million.

If Lance, Krystal, and Boom Boom want to reach their 20s, they'll need to cash in on a lucrative bounty that gives them the resources to disappear. They're granted that opportunity when President Angela Klaxton puts out an unprecedented $25 million reward for the world’s most dangerous terrorist, cult leader Mikhail Rasputin. If they acquire that bounty, Lance and his female companions will be able to vanish into the shadows, living the rest of their lives in unimaginable comfort.

The task of hunting down Rasputin is easier said than done, of course. The trio must first traverse the crime-riddled wasteland of America, avoiding the throngs of bounty hunters and criminals who would love nothing more than to bring their severed heads to Caesar. And when they finally do reach Rasputin’s rumored hideout, they stumble upon a conspiracy that could reduce the Earth to radioactive ash. Lance, Krystal, and Boom Boom started this voyage with the intention of making some serious dough. They end up, however, being the only people standing in between a continued peace and a catastrophic nuclear war.