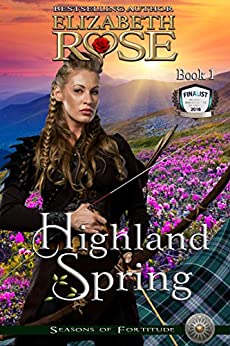 ★International Digital Awards Finalist★
Strength is not always measured by physical prowess!
Spring has been raised as a warrior, always trying to please her Scottish father of Viking descent. Through the years she's tried to be the son he wished her to be. At a young age she's chosen the bow and arrows as her weapon and has now mastered the skill. Growing up without a mother, the only skill she hasn't learned is how to someday be a mother to children. To her dismay, her father decides to marry her to their enemy, Shaw Gordon, as a ploy to get inside his castle and claim it as their own.
Chieftain Shaw Gordon is a widower with two boys and one unruly adolescent daughter. He decides it's time to take a wife again, but never expects to be presented with his enemy's daughter. The woman is fierce, and nothing like the mother he wants for his children. The Gunn clan has been an enemy of the Gordons for as long as he can remember. While an alliance would be good, he still doesn't trust them.Can two enemies push aside their differences for the benefit of all? And can a woman draw strength from herself as well as from her new husband when she discovers the horrible secret of her past, that her entire life is nothing but a lie?