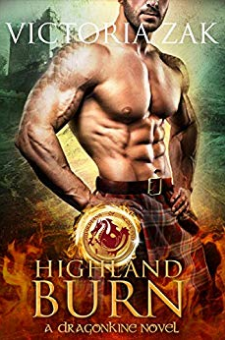 Will Love’s Flame Quench the Dragon’s Fire? ...The past never stays in the past, it rears its ugly head eventually. James the Black Douglas knows this all too well. With a past that has left him vengeful and his dragon blood thirsty, his reputation as a ruthless warrior haunts his enemies in their sleep. As his allegiance stands with Robert Bruce, the King of Scotland, he must now repay a debt to the king and agrees to marry his daughter, Abigale Bruce. The problem is he doesn’t want a wife. When flames start to burn out of control between him and the auburn-haired lass, he must decide to either kindle the flames of passion or shelter her from the truth and set her free.It’s What Shines in the Dark That Brings Forth Your True Light...Determined to keep his daughter safe and out of the hands of the English, Robert hides Abigale behind the safe walls of a nunnery. After eight long years of living her life in seclusion, Abigale is finally set free. But her new found freedom comes to an abrupt halt when she learns of her betrothal to the infamous Bogeyman – James the Black Douglas. She soon finds herself falling in love with the uncontainable and haunted man. Is her love enough to soften his hardened heart?