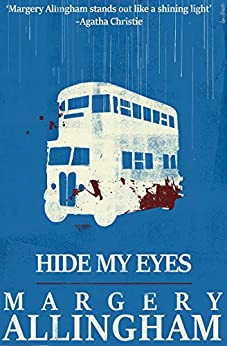 In this classic Allingham, private detective Albert Campion finds himself hunting down a serial killer in London’s theatre-land.

A spate of murders leaves him with only two baffling clues: a left-hand glove and a lizard-skin letter-case. These minimal clues and a series of peculiar events sets Campion on a race against time that takes him from an odd museum of curiosities hidden in a quiet corner of London to a scrapyard in the East End.

Allingham shows her dark edge in Hide My Eyes and evokes the sights, sounds, and inimitable atmosphere of fifties London.

‘Allingham has that rare gift in a novelist, the creation of characters so rich and so real that they stay with the reader forever’ — Sara Paretsky

‘Always of the elect, Margery Allingham now towers above them’ — Observer

'Margery Allingham stands out like a shining light.' — Agatha Christie