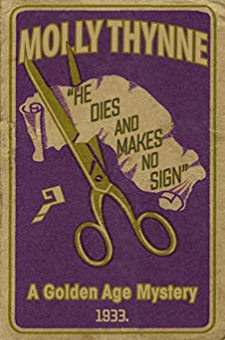 “He had his enemies, I suppose?”“Disputes, you mean? Over the merits of Puccini and Wagner, Strauss and Verdi! But people do not entice an old man from his home many years afterwards to avenge Wagner or Puccini!”It was a shock to the Duchess of Steynes when her son announced his engagement to the grand-daughter of an obscure violinist, Julius Anthony; but still more of a shock was the discovery of Anthony’s murdered body in the cinema at which he played.Dr. Constantine and Detective-Inspector Arkwright join forces in their third (and final) case together. Their only clue at the outset is the dead man’s mysterious assignation at the Trastevere restaurant, one of London’s most fashionable eateries, and located, as it happens, on the property of the Steyneses. The biggest challenge at first appears to find any kind of motive for the old man’s slaying – until their investigations lead in a fiendishly unexpected direction.He Dies and Makes no Sign was first published in 1933. This new edition, the first in many decades, includes an introduction by crime fiction historian Curtis Evans.