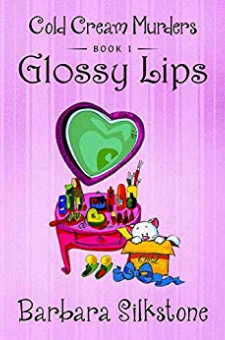 Series: more books on the way! ~~~Olive Peroni put out her family therapy shingle six years ago, never thinking her top client would be Myron Meyers, head of a New York crime family. When Olive’s grandmother dies and leaves her a condo in Florida and a secret recipe for miracle cold cream, she grabs the chance at a new life in Starfish Cove, Florida, making designer creams for ladies who spend far too much time at the beach. Business is brisk and life is good! Olive even makes a wild new best friend in Lizzy, the real estate agent who handles the transfer of Nonna’s condo. When a dead body is found in the trunk of Lizzy’s car, Olive despairs that life in Starfish Cove won’t be any different than the one she thought she’d escaped. But this time, instead of listening to confessions of murder, Olive’s going to have to solve one. Maybe two… Contains a recipe for Olive & Lizzy’s super-creamy homemade lip gloss! Book I in series ~ GLOSSY LIPS Book 2 in series ~ SMOKEY EYES Book 3 in series ~ SOAP ON A ROPE - coming this Spring! ~*~“Barbara Silkstone is beyond clever. She's an engaging writer who, with great skill, manages to make her skewed world ring true. The best thing about her characters is that they are not caricatures; they are real with all their dimensions intact. The best thing about Silkstone is that she manages to exhibit equal measures of talent and imagination.” ~ Kindle ReaderAuthor of the Florence Nightingale Comedy Mystery Series, The Giggling Corpse, The Killer Corset, and The Cheeky Corner, Barbara Silkstone is also the creator of the best selling Mister Darcy series of comedic mysteries ~ 9 Books plus 10 Regency novels and novellas, all with a light, humorous touch. She is also the author of the Wendy Darlin Comedy Mysteries – 5 Cozy Romantic Adventures combining Nick and Nora Charles with Lara Croft. Check out her Amazon Author page or visit her at the https://secondactcafe.com Most books are available in paperback and audio!Barbara Silkstone’s Amazon Author’s pagehttp://www.amazon.com/Barbara-Silkstone/e/B0047L8A8W