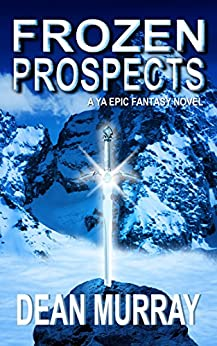 The invitation to join the secretive Guadel should have been the fulfillment of dreams Va'del didn't even realize he had. When his sponsors are killed in an ambush a short time later, he instead finds his probationary status revoked, and becomes a pawn between various factions inside the Guadel ruling body.Jain's never known any life but that of a Guadel in training. She'd thought herself reconciled to the idea of a loveless marriage for the good of her people, but meeting Va'del changes everything. Their growing attraction flies against hundreds of years of precedent, but as wide-spread attacks threaten their world, the Guadel have no choice but to use even Jain and Va'del in their fight for survival.Publisher's Note: Frozen Prospects is a YA Epic Fantasy book, and is the first novel in the Guadel Chronicles Series, a series of books which were written so that they can be safely enjoyed by teens and adults alike. Frozen Prospects is followed by Thawed Fortunes, and is only one of several free YA books available from Dean via Kindle.The Guadel Chronicles: All the scope of an epic fantasy combined with the action of a sword and sorcery book!Dean Murray is the successful author of multiple clean young adult paranormal romance, urban fantasy, and epic fantasy books which collectively have more than 480,000 copies in circulation.