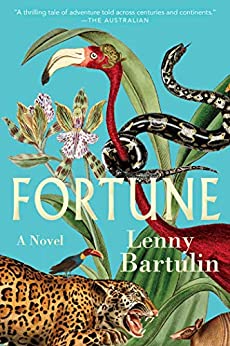 Fortune is a dazzling, endlessly surprising, and gripping historical novel that opens the day Napoleon leads his victorious Grande Armée into Berlin after having conquered Prussia in battle. As crowds throng the streets to witness this momentous event, a handful of lives that briefly touch are sprung from their orbits and set on courses that will take them across Europe and around the world—their fates and desires sometimes intersecting—to strange lands in the Caribbean and South America, the Australian continent and van Diemen's Land, and back to a Europe now transformed.

A frustrated general in Napoleon's army, billeted with one of Berlin's finest families. Elisabeth, a passionate young woman living with her aunt in that house. A young man of eighteen years and no particular talent, drawn to the smoky coffeehouses where students debate, whom she spies through a window fornicating with a serving girl at the moment Napoleon makes his grand entrance. An entrepreneur in New World exotica with a passion for shrunken heads, to whose house the young man was led for his tryst. A slave from Suriname, Mr. Hendriks, with his resentful white American companion, who have traveled to Berlin to sell a barrel of electric eels for their master. And a student enamored of philosophy, who will join Mr. Hendricks and the American on their return voyage.

Through their stories amid war, cataclysm, colliding cultures, and misadventure, Lenny Bartulin imagines the ways that grand events in extraordinary times can shape the course of ordinary lives.