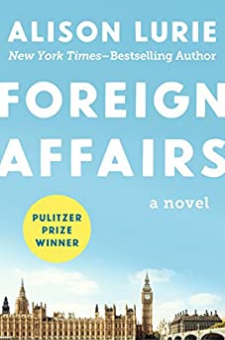 This Pulitzer Prize–winning novel follows two American academics in London—a young man and a middle-aged woman—as they each fall into unexpected romances.

In her early fifties, Vinnie Miner is the sort of woman no one ever notices, despite her career as an Ivy League professor. She doubts she could get a man’s attention if she waved a brightly colored object in front of him. And though she loves her work, her specialty—children’s folk rhymes—earns little respect from her fellow scholars. Then, alone on a flight to London for a research trip, she sits next to a man she would never have viewed as a potential romantic partner. In a Western-cut suit and a rawhide tie, he is a sanitary engineer from Tulsa, Oklahoma, on a group tour. He’s the very opposite of her type, but before Vinnie knows it, she’s spending more and more time with him.

Also in London is Vinnie’s colleague, a young, handsome English professor whose marriage and self-esteem are both on the rocks. But Fred Turner is also about to find consolation—in the arms of the most beautiful actress in England. Stylish and highborn, she introduces Fred to a glamorous, yet eccentric, London scene that he never expected to encounter.

The course of these two relationships makes up the story of Foreign Affairs—a finalist for the National Book Award and National Book Critics Circle Award as well as a Pulitzer Prize winner, and an entertaining, poignant tale from the author of The War Between the Tates and The Last Resort, “one of this country’s most able and witty novelists” (The New York Times).
This ebook features an illustrated biography of Alison Lurie including rare images from the author’s personal collection.